Multi Wire Proportional Chambers (MWPC) is a relatively small, proportional wire chamber for use in the secondary beam lines. 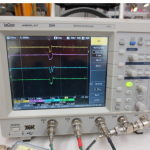 The MWPC tracking system is made up of 4 stations, and an associated DAQ system. Each station consists of  2-plane (X,Y) wire chamber and the necessary hardware to support it. Each plane has 128 wires, perpendicular spacing between wires is 1 mm. Accurate relative positioning of the planes within a chamber is automatic.

The chamber has been designed to minimize the amount of matter in the path of the beam. The windows are made of 0.0005″ aluminum foil. The sense wires are 0.0004″ gold plated tungsten. The cathode planes are 0.0005″ aluminum foil. The chamber half-gap (distance between sense wire and cathode) is 0.125″. In a typical installation, having two sense planes in a module, the material in the beam is 0.025″ Al, 0.75″ gas and an average of 2×10-6 inches of tungsten. This is about 0.002 nuclear collision lengths, or 0.007 radiation lengths.

Currently the chambers use nanometric N-277C3  amplifier-discriminator cards. There are 8 cards installed on each plane. Only one side of the C3 cards is grounded. Orientation matters!

The digital signals are fed through rainbow ribbon cables to CAMAC 3377 TDC digital processor modules. Each module has 32 channels, and each channel reads out 1 wire. Therefore, there are 4 TDC modules for each plane. Two  N-277 cards go to each TDC.

The four chambers are read out with LeCroy 3377 CAMAC TDC modules in CAMAC crates.  Each module is attached to two amplifier discriminator cards for a total of 32 TDC modules.  Each CAMAC crate is controlled by a Wiener CC-USB module.

Upon detection of a trigger the Python application reads out all the TDCs and writes the data to a file.  A trigger is formed by the coincidence of three PMTs and generates the stop signal for the TDCs.

At least yearly, the positions of the chambers are measured by the Fermilab Alignment group. The locations are found in MWPC_positions_Nov2016 for the 2016 alignment run. This will be updated each year.